Continuous security is a developer’s Nirvana. Always being secure while developing any type of software is a  dream state that is unrealistic to accomplish. However, if we strive to achieve this elusive goal, we might end  up with a software that is at least so secure that an attacker needs a lot of resources before breaching the application.

Crashtest Security provides software developers with an automated vulnerability scanning software for web applications and APIs. However, we also want to share our knowledge and best practices around cybersecurity  in all agile software development related topics.

Do you have a specific topic you would like to learn more about? Please write us! We promise to release content for your topic within a week.

For the introduction of continuous security topics, we start with one of the core principles: “continuous delivery”. This topic covers some general terms and definitions around DevOps and agile development. A continuous delivery process enables teams to take developed code and publish it automatically in a production environment. This process typically includes various tests and is the core enabler to automate and standardize security tests in software development.

If you have never heard of DevOps or the term “continuous security”, we recommend starting with our basic FAQ on all topics around DevOps. We introduce the general topic, why DevOps is introduced to software development teams, and some benefits. We also cover some basic technologies that drive the success of DevOps and agile development. Plus, you’ll get references for further readings.

If you want to understand the real-life benefits of a continuous delivery workflow, read our blog post “Why Continuous Delivery is Important”. We share the story of a user from a friendly startup trying to implement text changes in their software. The user was able to understand Heroku, Bitbucket, and the basics of code repository workflows quite quickly. Unfortunately, due to the lack of continuous delivery processes, the changes could not be checked without the agency.

In our final content on continuous delivery, we go in more detail and address the cybersecurity angle in much more detail. If you are interested in the bits and bites of secure DevOps Processes and red teaming, read our blog on “Why should cybersecurity care about DevOps?”. This article discusses the implications on security teams when it comes to DevOps and continuous delivery. We dive deeper into two concrete elements that cybersecurity should address: security champions and standardization through tools. Even as an experienced pentester or developer, you will learn something new.

Learn how you can implement Continuous Security into your agile development.

Containers create a virtual layer between the infrastructure and the code on top of it. This helps developers to always have the same conditions – be it in Development, testing, or production environments. Containers can be configured to include specific network, compute, and storage resources, as well as installations of operating systems and software on top. While the virtualization of the infrastructure and base-layer software makes it easier for developers, it is also a security concern.

For everybody a little more advanced, we have two specific How-to articles around containers:

For all Terraform, Kubernetes, and Vault users out there, we have a solution in case you run into an “resource does not have attribute” error. We have a short script for you to automatically create a Kubernetes service account and use the JWT token to provision Vault in the cluster.

Now that we covered the basics of continuous delivery and technical aspects, we can start with the advanced integrations and tools that can be integrated in DevOps workflows. we will specifically cover tools to enable security tests. Below is an overview over the different tools you can use in a DevOps environment. 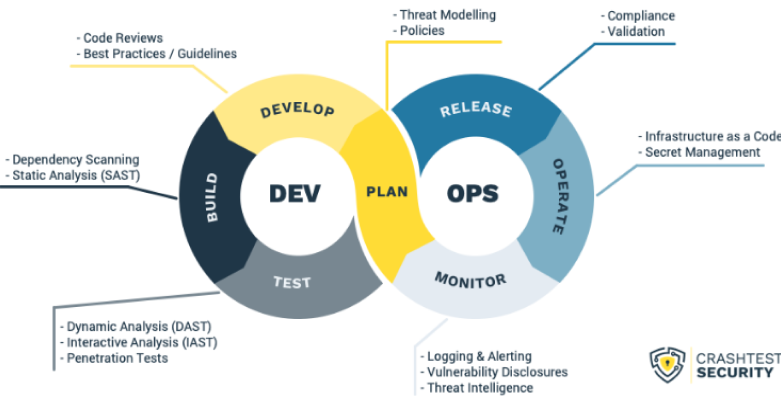 To start with, we have an article that will help you understand the deeper aspects of DevOps by providing further helpful resources. The materials cover culture, the first hands-on app development experience, end-to-end workflow mapping, automation, and KPI topics. Check out this article here: Learn more about DevOps

Next, we have created an overview over the security testing tools in DevOps. This article is a good starting point if you want to understand what type of security testing exists in DevOps – and what tools you can use for it. The story follows the various stages of a CI/CD pipeline, so make sure you understand the fundamentals before. This content is great to start on DevOps security!

Finally, we have a 30-minute tutorial on building your own DevSecOps pipeline for you! This tutorial will walk you step-by-step through setting up an app in Heroku, creating a simple CI/CD workflow with CircleCI, and integrating two tools: A SAST test (Python safety check) and a DAST test (Crashtest Security). You will also learn about basic GitHub push/pull/commit functionality.